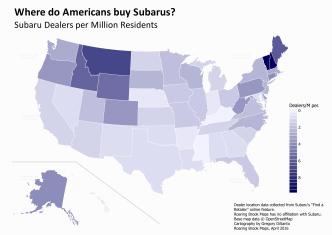 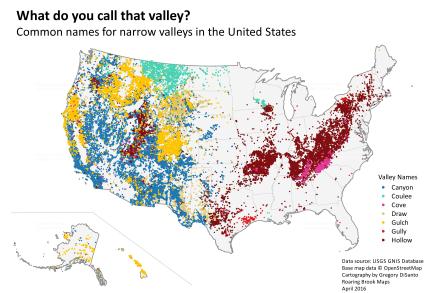 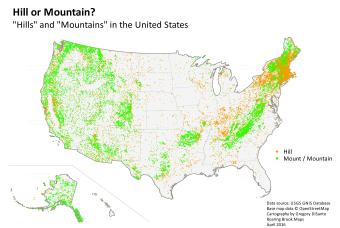 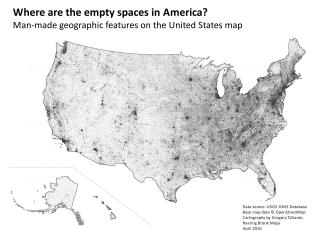 This blog is where I post non-commercial mapping projects that explore geography questions. Got an idea for a map project I should explore next? Contact me at roaringbrookmaps @gmail.com -Greg DiSanto

A map exploring the regional differences in how Americans name narrow valleys.

The first thing you notice on this map is that the Eastern United States mostly has hollows and coves. Out west, there are all kinds of narrow valleys. Some of these are widespread, but some have very distinct regional distributions. Western Texas and Eastern Wyoming have draws, Montana has coulees, and the Southern Appalachians have coves.

So how are these landform features different? In some cases, it’s a matter of scale – hollows are just small valleys, canyons are just deep and narrow valleys. Some valley types have defining characteristics – draws are small valleys that are noticeably steep up and down the draw, not just up and down the valley walls. Gully is a pretty generic term for smaller erosional features, but apparently there are some gullies in the Houston area and the Finger Lakes Region (NY) that are big enough to get named on a map. All of these terms are often interchangeable, and the difference is only in the name. People know a canyon when they see it and they know a gully when they see it.

So what about ravines, why aren’t they on the map? Well, here’s a map of ravines in the United States.

In the Eastern US, ravines are often the generic name for hollows and coves, but people attach hollow or cove to the end of a name. Just like how stream names often end in creek or brook, rather than stream. That said, there is one region that has a lot of ravines named ravines; in the Northern Sierras ravine is used interchangeably with canyon when naming small, steep stream valleys. It should also be mentioned that in the Northern Presidentials in New Hampshire, glacial cirques are sometimes called ravines.

These maps’ data comes from the Geographic Names Information System (GNIS), managed by the US Board on Geographic Names (BGN), a division of the US Geological Survey (USGS). GNIS names are the names that you see on USGS maps, like the classic 7.5 minute topographic quadrangles. The data can be downloaded at the GNIS Database.

This is part of a series of maps that explores regional toponymy in the US – how different areas name geographic features. Check out the previous maps in this series:

Is that a pond or a lake?

What do you call that swamp?

What do you call that stream?

What do you call that narrow valley?

Is that a hill or a mountain?

What do you call that hill?

View all posts by roaringbrookmaps

One thought on “What do you call that narrow valley?”